Welcome to the Cut Throat Cafe 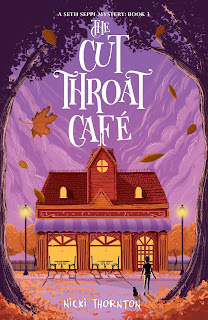 I am thrilled that publication of The Cut-Throat Café means there are now three Seth Seppi magical mysteries. The first was The Last Chance Hotel. Book 2 is called The Bad Luck Lighthouse.

For anyone who is discovering them for the first time, I think I’d sum them up as ‘when sorcerers go bad’.

Each story is centred around a mystery – a terrible deed (a murder usually as I like murder mysteries!) – and the possibilities of magic being at the foot of it all. Which makes it doubly difficult to investigate.
Seth Seppi, my detective character, a wannabe junior sorcerer, has an introduction to the magical world that shows just want a dark and dangerous place the magical world is.
But when he gets embroiled in a mystery, he knows that not all sorcerers use their magic for good. Some are greedy and want more power and that means more magic. Seth quickly discovers the lengths some people will go to in order to become more magical.
And sorcerers are very good at covering their tracks.
Throw in the magical police, MagiCon. Eccentric Inspector Pewter has a sharp brain and an unconvincing manner. Half the time Seth doesn’t really feel the inspector is good at solving anything. The other half of the time he feels the inspector is brilliant.
Seth is also assisted in solving his magical mystery cases by his long-term friend, Nightshade, a black cat who feels she is definitely the best when it comes to investigating.
I really hope you enjoy reading about Seth solving his mysteries and delving into the biggest mystery of all – how to become magical!
You do not have to read them in order, each is a separate case in itself. But I think you can enjoy them the best that way. And do let me know what you think. I love hearing from readers!

Welcome to The Cut Throat Cafe

Seth Seppi is excited to arrive in Gramichee, one of the few towns were a cluster of magical folk lie. But he’s worried that Angelique has only brought him here because she’s desperate to find someone to help him with his magic, which has been nothing but a disaster so far.

The offer of an apprenticeship means he has a chance to find someone might help him with his magic. Then he learns he has arrived in Gramichee at the worst possible time - an apprentice has been attacked and it's not the first incident.

So here's where you can order your copy: