It all started with The Last Chance Hotel, which introduced the idea of a world where magic exists, but is so rare most folk don't even believe in magic. So what if (I asked myself) you were a sorcerer and no one knew?
Would some magical people be tempted to use their magic in ways they really shouldn't?
And wouldn't tracking down crimes committed using magical be some of the most difficult to solve? Wouldn't that need a magical world with a few stiff rules and some specialist magical investigators for when things go wrong.
There are three book in the Seth Seppi Mystery Stories starting with the award-winning bestseller - and winner of The Times Children's Fiction Competition - The Last Chance Hotel. Seth's best friend is a black cat called Nightshade. As this is a magical world, Nightshade has found a way to give Seth her opinions by talking. She believes she is a great magical detective in her own right and gets the chance to prove her own detective skills in my two latest books.
You can discover my latest book - The Poisoned Pie Mystery - and they are all part of the world of the Elysee Sorcerers, all are about detecting magical crime and there are now five of them!
If you'd like to hear the opening chapter of each book - I read them over on my YouTube channel. 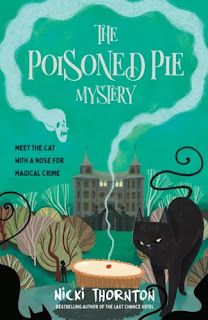 Find out what happens when the unluckiest boy in the world meets the greatest magical detective.
Oakmoss Hornbeam is more than a little clumsy.
But does his best friend, Veena, have to call him the unluckiest boy in the world? He has so many accidents he is wondering if his Uncle Erasmus is right and he's under an ill-wishing spell. But who would want to harm a slightly undersized, very unlucky schoolboy?
You might think being part of a magical family would be full of advantages. But in a world that doesn't believe in magic, all it means to Oakmoss is having to keep an awfu lot of secrets from super-smart Veena.
Oakmoss feels it's the worst possible omen when a black cat crosses his path. But he teams up with Nightshade when it turns out she knows far more about the magical world than he does. Together they set out to discover if someone is really out to harm Oakmoss with magic. 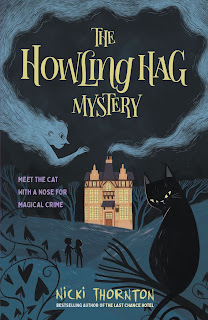 Take one cat who believes she is the world's best magical detective, a school plagued by curses and a witch who cannot do magic, and you have a new detective adventure and a new case of magical crime.
‘How do we even investigate a magical crime?’
‘It’s not so different from any other crime. We establish facts, look for motives, narrow the suspects,’ I said, settling down in the sunshine. ‘We pay attention to detail.’

They hadn’t quite yet seen the whole picture. I’d have to get to that.
"Blending magical adventure with Golden Age crime mystery, this delightfully atmospheric spin-off from the author of The Last Chance Hotel confirms Thornton's place as one of the most original children's writers around." - Waterstones Summer Reads 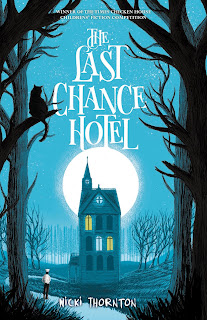 *WINNER* of the 2016 Times Children's Fiction Competition, the 2019 Ealing Children's Book Award, a Waterstone's Book of the Month in 2018, and nominated for the 2019 Carnegie Medal.

"Take a pinch of Agatha Christie, a soupcon of Cinderella, and lashings of Harry Potter-style magic and what do you have . . . a marvellous murder mystery at the creepy Last Chance Hotel" - Pam Norfolk, Lancashire Evening Post

The follow-up to the bestselling The Last Chance Hotel!

"With The Last Chance Hotel, Nicki Thornton fused magical fantasy with classic crime; its follow up pushes the envelope even further, with sinister conspiracies and ruthless organisations abounding around a curious lighthouse. Playful yet genuinely creepy, the Seth Seppi Mysteries are fast becoming must haves for any child’s library." - Waterstone's 2019 summer reading recommendations

The third in the Seth Seppi Mystery Series, and launched during a live YouTube event in April 2020, the latest Seth Seppi Mystery takes us deeper in the world of the Elysee Sorcerers...
"I think that this is my favourite book that Nicki has written so far. It is a truly wonderful story with so many unexpected twists and turns. This book is even more misleading than the ones before it but my favourite thing about it are the names, how DOES Nicki think them up (I love the name Tendril Vetch!)

It has so many relatable characters and many more mind-boggling mysteries to solve. Nicki instantly weaves another amazing bookworld filled with atmosphere, adventure and excitement, and a fair amount of soul-searching from Seth as he sometimes looks for easy (and sometimes quite dark) solutions to his problems, steered back on the moral path by his trusty best buddy Nightshade."
- Read It Daddy
Find out more...