As any readers of the first two Seth Seppi mysteries will probably have noticed, setting is very important for both the atmosphere and the plotting.

I have always been a big reader of murder mysteries and I particularly like the ones where there is a closed circle of suspects and everyone looking over their shoulder trying to work out which of them is a murderer. (As I always go on to say, this may sound gruesome, but really what I love is the puzzle!)

The first Seth Seppi mystery was set in the middle of the seemingly endless Last Hope Forest, in the Last Chance Hotel and the second was set at the isolated Snakesmouth Lighthouse, where a vengeful ghost was causing accidents to happen (or was it?).

So, expect a bit of a change for Seth's newest challenge, as this time someone is murdered in a bustling and popular cafe, right in the middle of the central square of Gramichee, one of the few towns were many magical people live.

This time it is the magical apprentices who are in trouble.

Seth Seppi is excited to arrive in Gramichee. But he’s worried that Angelique has only brought him here because she’s desperate to find someone to help him with his magic, which has been nothing but a disaster so far. 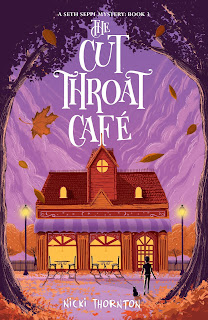 The offer of an apprenticeship means he has a chance to find someone who might help him with his magic. Then he learns he has arrived in Gramichee at the worst possible time - an apprentice has been attacked and it's not the first incident.

I am thrilled that Seth is having another outing in his third magical mystery adventure, The Cut Throat Cafe, and hope readers will enjoy being back with Seth, Nightshade, Angelique and Inspector Pewter.

I hope you love the exciting colours by the wonderful Matt Saunders, who designed the cover images for the first two books.